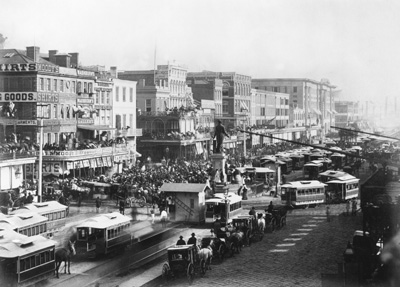 British Economist Angus Maddison put together in 2007 the first comprehensive analysis of global incomes dating as far back as is possible, known as the Maddison Project). For the US and most of Western Europe the data is sporadic before 1800 but has yearly data after 1800. For the rest of the world the data starts post World War II as estimates before then are not reliable.

The most fascinating aspect of the data is being able to compare where countries are at today versus the year that the US had the same level of economic activity. It is a crude comparison because cars and computers span the globe in even the poorest places but it really drives home how far behind certain places are.

There is no credible data before 1950 so that is why the red line is only on the right half of the graph. Uganda’s GDP per capita is basically flat. It has been growing in recent years but it is still a very poor country. The highest point on the graph for Uganda is about where the US is in 1800.

Now much of Uganda is far more advanced than the 1800s US. There is internet, off and on electricity, running water, satellite TV, etc but when you look at how the average person is living here, the 1800 comparison seems spot on. While the amenities are available, the vast majority don’t get to use them. Most don’t have a car, electricity, running water, a computer, etc. Quite the opposite, many rarely eat meat because that is a luxury item for them.

What is more interesting is that as a Western who is here to help am I asking myself what was the US like in 1800? What were the things that worked for the US to develop in the 1800s? Ha.

US in the late 1800s. Uganda has cars but it is pretty safe to say that the average person here is much better off than the average Ugandan

The biggest areas of focus for Americans out here is in education and health. Surprisingly, Uganda probably has better education and better health care then the US did in 1800 because some of those modern advances have made their way out here too. So if we follow this line of reasoning do we really need to scratch our heads at the lack of development despite the focus on education and health? The US didn’t need vast improvements in those areas before it took hold of the industrial revolution but somehow Uganda needs to? 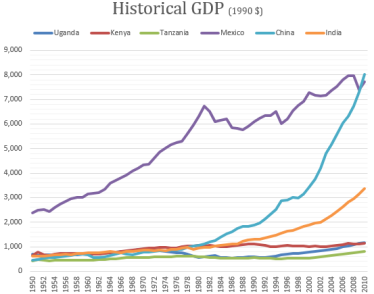 Uganda compared with a few other countries

For me the biggest takeaway is this. For most of the 1800s the average US government budget was 3% of GDP. Today in Uganda, the government is about 20% of GDP. In the US in the 1800s, individuals making a name for themselves made America. In Uganda today, the individual in undermined by the power of the state and importantly, the presence of aid (Westerners) doing things they couldn’t possibly dream of doing themselves. Unless of course the government and aid were never here. Then they would have to dream like Americans in the 1800s had to.